I have enjoyed many meals prepared in a slow cooker, but I have never been able to find one in Switzerland. I don’t actually want one – I used my old one rarely,  but I do miss the stews that they are so well suited to create. With that in mind, I decided to experiment with the idea of slow cooking a stew with my conventional oven. After a little research, I discovered the process is more or less the same.

Although I don’t eat a lot of meat, stews, like soups, are so versatile and perfect for the cooler months. I was determined to find a cooking method that would give me the same tender and flavorful creation I use to enjoy.  I am happy to say that this stew turned out delicious! It will be a comfort on those blustery evenings nipping at our heels as we deep into Autumn.

Enjoy this with a Humagne Rouge from Provins Valais! 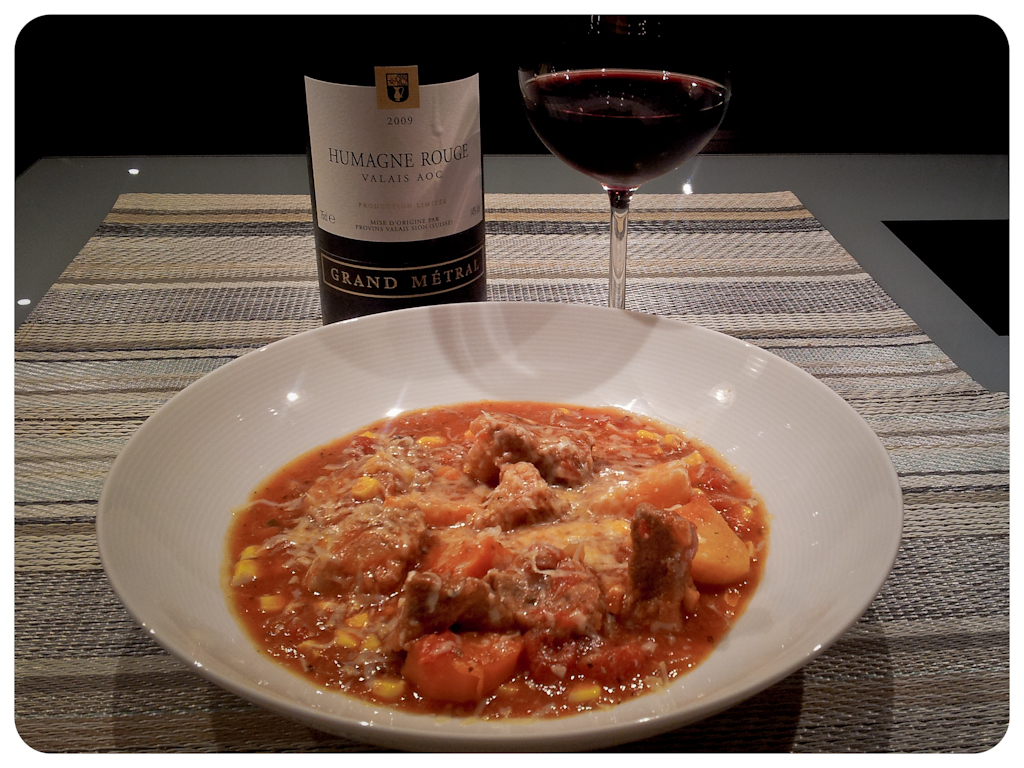 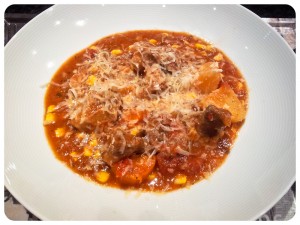 Spices are not often something I measure. The noted quantity is a guide. Add more or less of the flavors you enjoy, or don't.

Corn is seen in the photos, but I excluded it from the ingredient list. It was good, but it was not the flavors or colors I wanted for the stew. I had some corn on the cob that needed to be used so in it went.

A  few more tomatoes would have been nice and I would consider adding some diced fresh tomatoes next time.

The red wine vinegar was more of a "dash" and closer to a couple tablespoons. Start with less then taste your sauce and add more if you wish.

Cooking time can vary especially with the raw potatoes and carrots. If you wish, steam the vegetables a little before adding them. I will do this next time. The meat was tender and cooked through, but the potatoes were slightly firmer than I like.

Centering the meat and surrounding it by the vegetables would have probably allowed the meat to absorb more of the juices.

Instead of the "Roux" for thickening, you can as easily dissolve the flour in a bit of water and incorporate it. The Roux will give you richer flavor, but it is optional.

Humagne Rouge  is a relatively new wine varietal in Switzerland having made it’s way across the Grand Saint Bernard in the 19th Century. It is understood to be a cross between a Cornalin and another varietal, whose origin is unknown, fabricated in Val d’Aosta in Italy.  The Humagne Rouge is one of the most popular red wine varietals in Canton Valais, second only to the the Cornalin itself.

This beautiful ruby colored wine with its fruity notes and good tannin structure stands well beside cheeses, meat dishes in general, Italian meals and particularly enjoyable after 3-5 years with game. It is one of my favorite Swiss red wines and it was a nice partner to the Italian Slow Roasted Pork Stew.

Provins Valais, a cooperative founded in 1930, is the largest producers of Swiss Wine and is responsible for 23% of the wine produced in Canton Valais and 10% of the total production in Switzerland. They are well recognized by some of the largest International Wine Competitions and have won the most medals of any other cave in Switzerland. 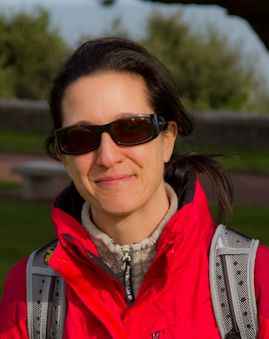